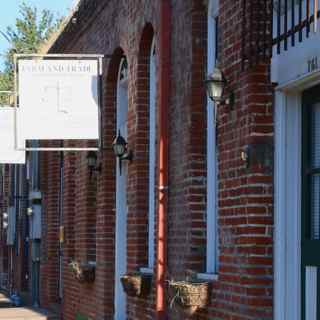 The town of Colusa has an interesting background. In 1846, Dr. Robert Semple of Benicia was returning from a trip and stopped for a short rest and the Rancheria of the Colus Indians. He liked the beauty of the county and the fertile soil and the thought he saw the location of a future city. He inquired as to while the land belong and found it belonged to John Bidwell, who obtained it under a Mexican grant. Semple made a not of then and when his brother, Colonel Charles D. Semple arrived in California in 1849, he told him and lost no time in finding Bidwell and buying the grant from him. In the early 1850's, Colonel Semple set out with a little steamboat to start a town on his new land. Among the men accompanying Semple was his seventeen year old nephew, Will Semple Green. The group was headed for the Colus Rancheria, but missed it in some was and landed seven miles up the river. Colonel Semple soon realized his mistake and he and his men moved back down the river and built a crude hotel, where they cooked a whole meal for a dollar. They surveyed the streets and built houses, and the town of Colusa was born.

At the time when Colonel Semple set out to build a city, his brother, Dr. Semple was building a steamboat at Benicia and on July 3, 1850, she got under way. She was called the "Colusa" like the new town to which her future voyage was bringing her, thought the earliest name in English for the present town was "Salmon Bend."

As soon as boats began to run regularly, a daily stage line was put on by Baxter and Company between Colusa and Shasta, and the travel to the mines in the north began to flow in this direction. There was so much travel that a Mr. Johnson put on an opposite line and it was the liveliest staging we had ever seen before or since. They came through in daylight and would come neck-and-neck with the horses in full run. As a result of this travel, stage stops called mile houses sprang up rapidly along the river.